The topic of how a Christian should live is not a new topic. This age-old debate has been around throughout church history. What prompted the release of a new book, “What Would Jesus Really Eat? The Biblical Case for Eating Meat” now?

“Over the past decade, a growing number of misleading messages about modern animal agriculture have been presented by animal rights activist groups to church and religious leaders or in religious forums, under the guise of religion and compassion,” says Kay Johnson Smith, president and CEO of Animal Agriculture Alliance, which helped fund the production of the book.

Loud voices have been pressuring Christians to turn their freedom into bondage and to adopt false commandments based on activist convictions. Voices from inside the church have also joined in. Some activist groups are even providing curriculum to Sunday School classrooms covering topics such as caring for God’s creation and stewarding animals.

The Freedom to Eat Meat
The book takes a deeper look at what the Bible has to say about using and eating animals from several different perspectives. Edited by Palm Beach Atlantic University’s Wes Jamison, PhD, and Paul Copan, PhD, the contributing authors tackle topics including the challenges to Christian meat-eating, human exceptionalism and humanity’s dominion over other living creatures.

“The new animal-protection technology overlooks divine mandates for animal slaughter, and the animal rights pragmatists misappropriate scripture in service to their agenda, misquoting or taking verses out of context; they arbitrarily proof-text scripture, making selective use of the Bible while overlooking the clear teachings that humans may joyfully use and eat animals; and they use faulty logic and abuse secondary sources,” Jamison says in chapter four.

“Christians have the freedom to eat meat, without it being a question of conscience,” Jamison says. “In fact, not only can they do it, they are blessed when they do it. I Timothy 4: 1-5 gives an explicit warning to avoid people who tell you that you can’t eat – that you can’t eat animals or other things in God’s creation. It says that all things created by God can be eaten and enjoyed as long as they are sanctified.”

Raising Pigs for Food
In Chapter 10, brothers Gordon Spronk and Randy Spronk dig into the question: Does scripture allow people to raise pigs for food?

“The theologian feeds the soul, the philosopher feeds the mind, the agriculturist feeds the world and he uses the blessings of his labors…meat,” Gordon Spronk says.

Flocks and herds have a purpose to feed the hungry and to be eaten. The Spronks write that raising animals for meat is a spiritual calling “in response to the command to take our place in God’s kingdom.” 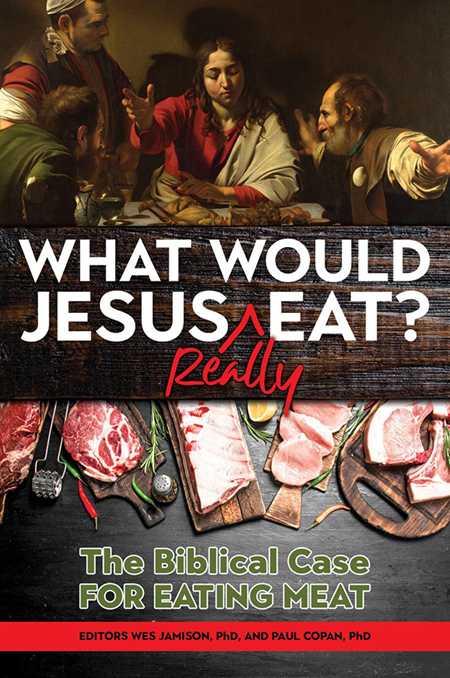 Who is This Book For?
Jamison says this book is written at a very approachable level for people who attend church or are Christians who want to know the theological reasons for eating meat. It’s also a good resource for opponents of animal agriculture to show what the Bible really says.

“What Would Jesus Really Eat? will help arm farmers and ranchers and others in the animal agriculture industry with the information they need to have informed conversations about the complex subject of religion and eating meat. You’ll be better prepared to push back against activist claims after reading this book,” Smith says.

For more information about the book, visit the Animal Agriculture Alliance.

On National Bacon Day, Learn More About its Growing Popularity
5