In ancient Greece, Plato said “Necessity is the mother of invention,” but it’s the modern-day mantra for Dave Klocke in northwest Iowa. Although pork prices have rebounded recently, producers still need to make every penny count, in good times and bad.

Klocke has developed products for use on the family’s 2,700-sow operation, and since 2015, he’s been manufacturing them for other producers through his PigEasy company. Here are some of the practical products he’s invented (others can be found at the company’s website).

•    MealMeter: This ad lib feed dispenser is inserted into a drop feed tube in the breeding area or via a transition boot in lactation. Even within the same genetic line, pigs eat differently. Some gilts and sows are “nibblers” and some are “gorgers.” Some are just finicky eaters. This device allows the sow or gilt to eat at will, which is proven to achieve maximum feed intake for pre-breed gilts, weaned sows, under-conditioned sows and lactating sows. “The better a gilt does on her first litter with total born and numbers weaned clearly carries throughout her lifetime,” Klocke says. “It kind of hit me in the gut, because that’s where we weren’t doing very well. It’s costing you dearly throughout that sow’s life.” The MealMeter allows gilts and sows to eat the way they want to eat, and the production improvement shows it’s paying dividends. After the MealMeter was installed in front of all the incoming gilts, the Klockes saw an improvement over the next six months (compared to the previous three months) of 1.75 pigs per litter. In summary, Klocke says, “Gilts are getting blamed for having genetic problems. That’s not it. It’s simply intake. There’s a lot of life left in these sows, and they get sent to market not because they failed us, but because we failed them. We’re getting these gilts off to a stronger start; we were able to reduce the number of sows we were culling. In fact, 96% of the gilts that get delivered to the farm have a litter.” 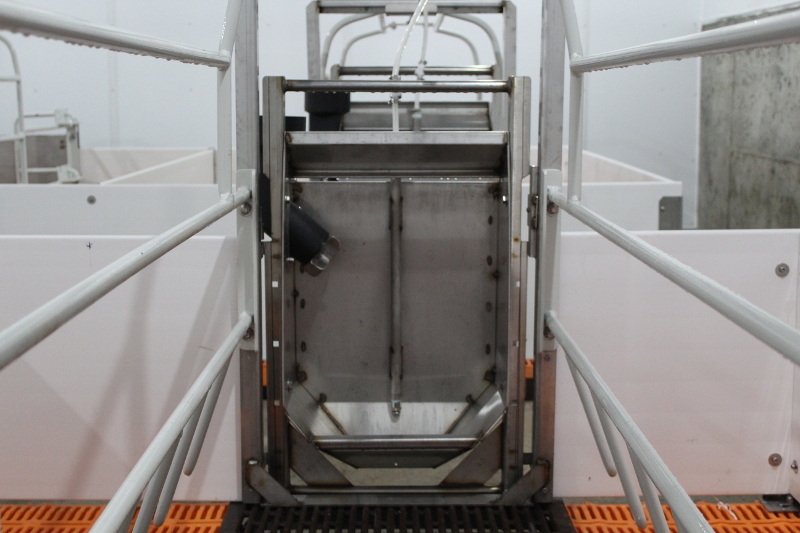 •    PigEasy Sow Feeder: Along with the MealMeter feed dispenser, the Sow Feeder’s exclusive design achieves maximum intake while eliminating feed waste. This different approach to ad-lib feeding features a smaller bowl so feed stays fresher and it promotes less wastage. “Feed doesn’t build up in the feeder because there are no hard-to-reach deep corners,” Klocke says. “Dispensed feed naturally lands in the center of the feeder and as the sow presses up on the button nipple to drink, water is cleaning up that area so it is ready for the next time she is ready to eat.” 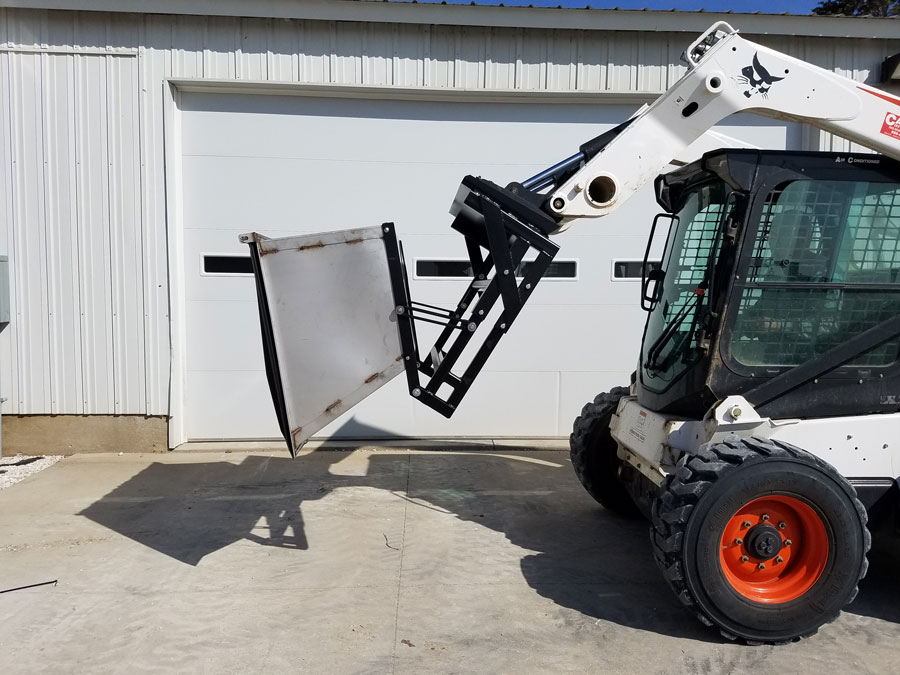 •    Chuck-It Bucket: This holding/disposal tank is used for daily removal of pig mortalities and afterbirth in sow farms to assist in biosecurity protocols by lowering cross-contamination. The stainless steel tank is specifically designed to adapt to skid loaders or loader buckets for easy emptying into an off-site dumpster or compost site. 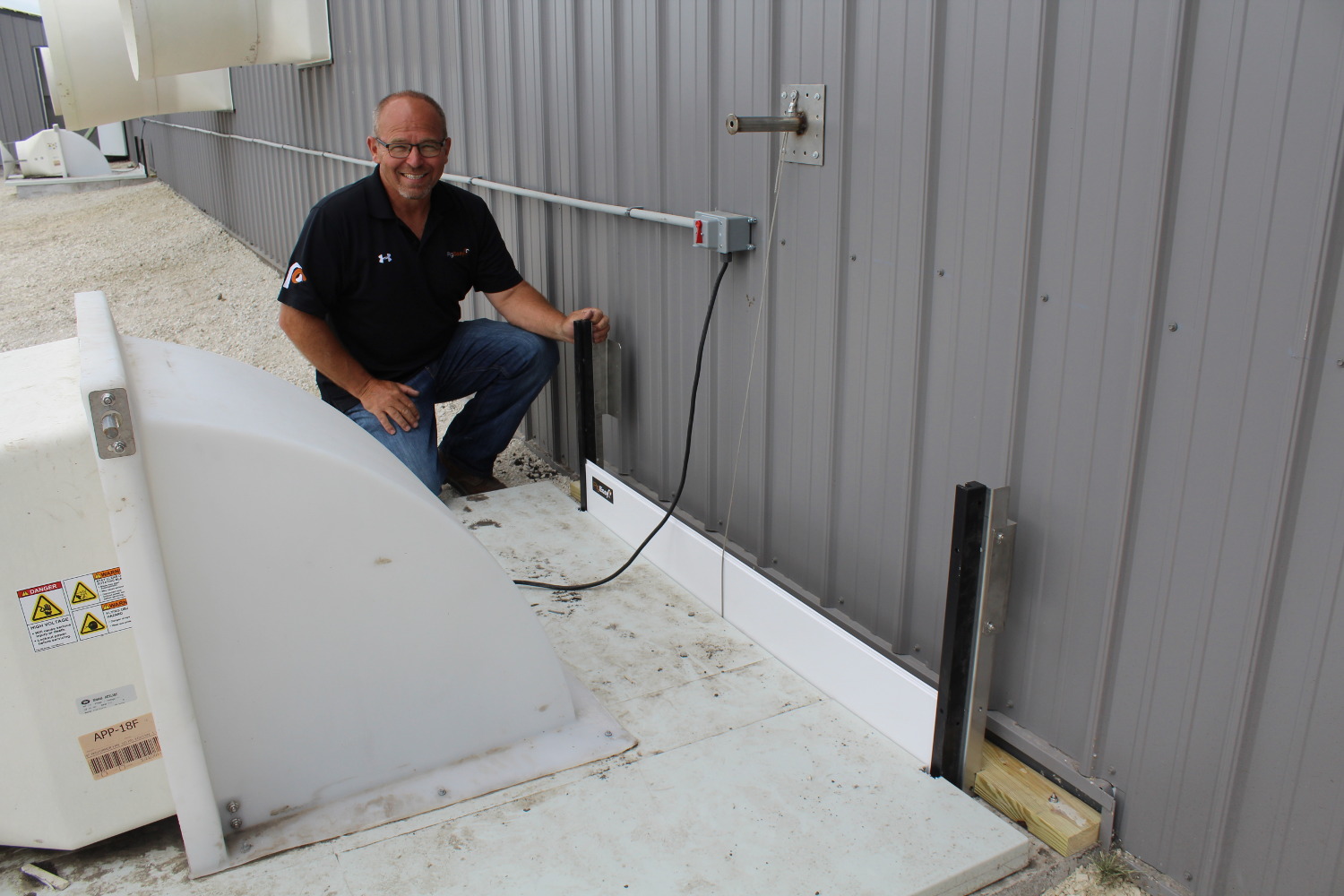 •    BrEasy: This is one of the newest products from PigEasy. It is a baffle that’s installed between a pit fan and the pit to redirect the air. “While you’re seeing a trend away from pit fans and toward wall fans, it’s really because pit fans weren’t made to work effectively. This product helps pit fans do what they were designed to do,” Klocke said. An on-farm trial showed shown the BrEasy offers a 39.5% reduction in heater run times in three turns, with an average savings per turn of $132 in propane savings per room. Katie says they also looked at overall mortality, which was 33.5% lower in the nursery rooms utilizing the BrEasy. “In addition, a trial by Dan Anderson at Iowa State University showed it dramatically improved the air quality in the nursery,” she says.