By Diego A. Rodriguez, Su A Lee and Hans H. Stein, University of Illinois

A patented high-shear dry extrusion process that uses a continuous pressing of oil may be used in the production of soybean expellers, which typically contain 5 to 8% oil. The greater concentration of oil in soybean expellers compared with SBM may result in increased digestibility of amino acids and energy, but this hypothesis has not been experimentally verified.

Two experiments were conducted to test the hypothesis that digestibility of amino acids, total dietary fiber, and gross energy and concentrations of digestible energy (DE), metabolizable energy (ME) and net energy (NE) are greater in soybean expellers compared with SBM.

Amino Acid Digestibility Trial
Two diets were formulated to contain either high-shear dry extrusion soybean expellers (ExPress®, Insta-Pro International) or soybean meal as the only source of amino acids. Diets were fed to ileal-cannulated pigs and ileal digesta samples were collected to calculate the standardized ileal digestibility (SID) of amino acids in each diet. 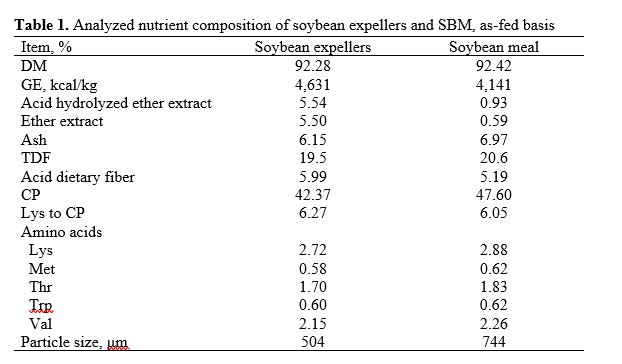 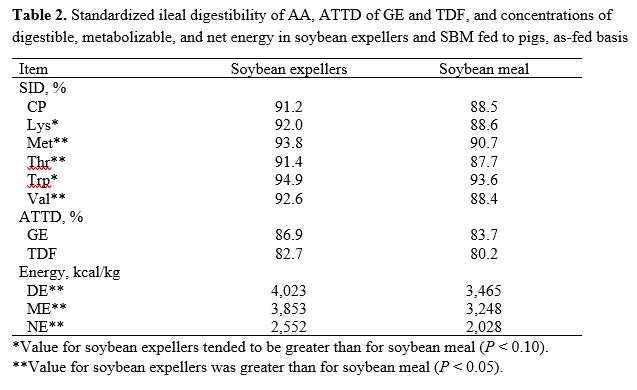 Fiber Digestibility and Energy Metabolism Trial
In the second trial, a corn-based basal diet and two diets containing corn and soybean expellers or corn and soybean meal were formulated. Fecal and urine samples were collected from pigs placed in metabolism crates to calculate the apparent total tract digestibility (ATTD) of energy and total dietary fiber and concentrations of DE and ME. Concentrations of NE in diets were also determined using a published equation.

Extruded Grains May Be Better for Pigs

At a Crossroads: Where Does the Pork Industry Go Next?
2

Plan and Prioritize to Earn Back Time
3