Feed cost
Feed cost only takes into consideration the cost of the diets for comparison between one nutritional program versus another. This method is the simplest and has its greatest and best application when there is no expected change in pig performance associated with nutritional program. However, because changes in ingredients or nutrient levels often change pig performance, it should rarely be used as the main evaluation of economic competitiveness of a feeding program.

IOFC and IOFFC are accurate methods to determine the economic value of a nutritional program. The best application is for systems that run on a fixed-time basis and for comparison between nutritional programs when there is an expected or possible change in both feed efficiency and growth rate.

Example of Economic Calculations
The example below illustrates the use of feed cost, feed cost per pound of gain and income over feed cost, to determine the economics of added dietary fat. In this example, considering feed cost or feed cost per pound of gain, the nutritional program without added fat to grow-finish diets would be more economical. However, taking into account the extra weight gain and improvement in feed efficiency with added fat, there is a $0.76 per pig advantage in income over feed cost with a nutritional program with added fat to grow-finish diets. This would be the interpretation in a system that runs on a fixed-time basis. However, if the system runs on a fixed-weight basis and could take longer to achieve a heavier carcass weight, then feed cost per pig would also be an adequate indicator of the economic value of the nutritional program. 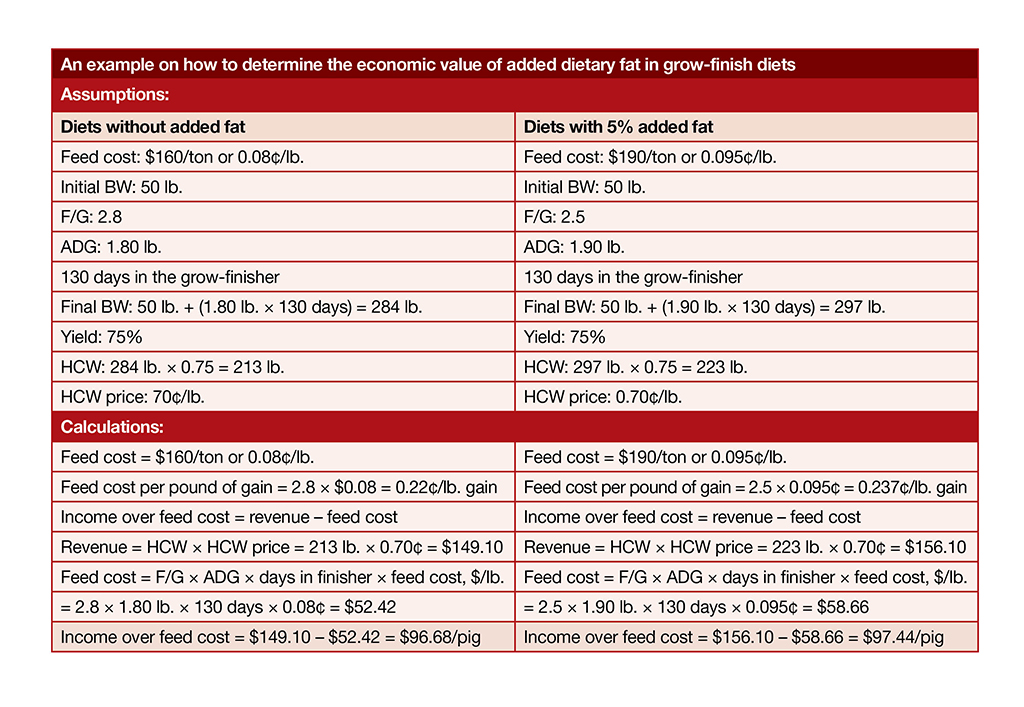 Leftover Feed in the Bin at Closeout: Manage That Remaining Feed

PREV
Trade Negotiations Increase Volatility in Pork Market
NEXT
What Would You Baconize?