Dave Klocke constantly thinks about how production can be better for the animals, easier for the staff and more efficient for the farm. This humble northwest Iowa producer used to sit on a bucket and just observe the pigs. A lot of producers might do the same thing, but Klocke takes his thoughts and ideas a step further by developing products to make pork production more efficient and profitable through his company, PigEasy.

Klocke grew up in the house he still lives in with his wife, Karen, just outside of Templeton, Iowa. He’s been around livestock and farming his entire life, and he sees that as an advantage: His experience allows for a unique perspective to identify opportunities for improvement. Following in the footsteps of his father, Herbert, Klocke knew he wanted to be a farmer at an early age.

After high school, he enrolled in an agricultural program at Iowa State University, but he didn’t have the opportunity to finish. His dad suffered a debilitating stroke when Klocke was a sophomore in college, and he passed away that fall. Klocke returned to the family farm, and along with his brother, Dennis, the purebred breeding stock operation adapted to become a 2,700-sow farrow-to-wean farm with PIC genetics. Son, Ben, now runs Klocke Farms on a day-to-day basis, including 1,800 acres of farm ground, and assists with product development.

Klocke cut his teeth in production agriculture during difficult financial times. He “really hates” buzzwords, but the farm crisis in the 1980s taught him about economic sustainability. He refers to the dollars that get away as the leak in the bottom of the cup, and he constantly looks for ways to plug the hole. “I think in most cases, that’s probably what drives my thinking – knowing that something has the potential to be a lot better,” he says.

“Dad doesn’t really have a hobby,” says daughter, Katie (Klocke) Holtz, who serves as sales and marketing manager for PigEasy. “His fun time is spent in the shop tinkering, or just messing with whatever’s in his brain keeping him up at night.”

When Ben came into the operation, it gave Dave more time to focus on inventing. “Once he was free to use those talents, he became my engineer instead of my farmer,” Karen says.

Minimize the Variability
“If there’s one thing that bugs me as a producer – I don’t care if it’s on crop production or livestock – it’s getting rid of the variability,” Klocke says. “Why did this acre do this, and why did that acre do that? Why is this sow able to get to parity 12, and that one fail by parity 2? What’s the driver here?”

People might say, ‘Well that’s just their capability,’ but Klocke doesn’t believe it.

“There’s a lot more to the story than what we see in terms of variability. You have to dig into the conditions that brought this about.”

Klocke’s products have helped improve the farm’s profitability, but he credits Ben and the farm employees for excellent management as well.

“The family has put together such a great team,” says Eric Ogren, sales representative for PIC, who has worked with the Klocke family for six years. “This farm’s production numbers don’t just happen on all farms.”
Ogren has seen the operation evolve. The products Klocke produces help his farm maximize the genetics to their full potential and improve overall economic efficiency, but they’re also helping the entire industry improve. “No matter where you are on productivity, these products will help reduce variation.” 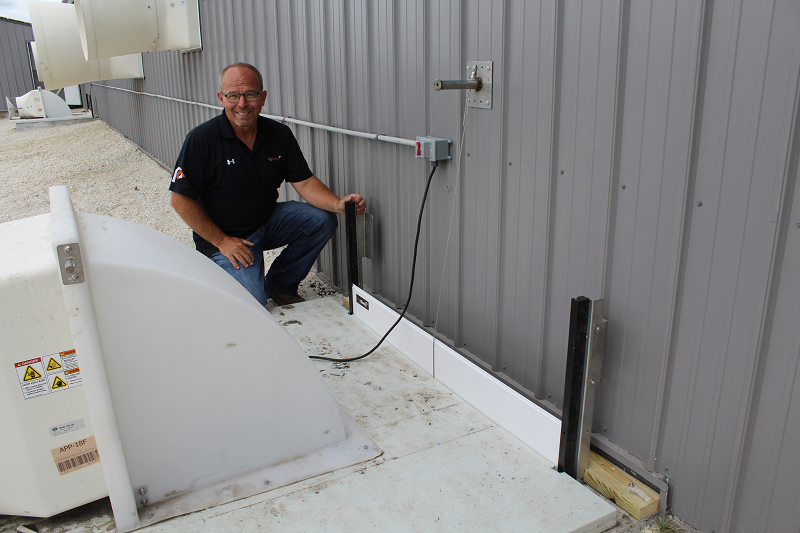 Start with the Basics
Nearly all the products Klocke has brought to market were designed to improve processes that hindered productivity because they either took too long or took too much effort, or they weren’t done the same way every time.

“You need that consistent effort to get a consistent outcome. Making something simpler or easier will lead to consistency,” Klocke says. That’s how the AI Saddle came to be.

“The staff was doing a thorough and meticulous job of getting the sows inseminated, but the process was just taking too long,” Klocke says. “The sows at the end of the row were already coming out of standing response. We wanted to figure out a way to continue to do a good job, just do it faster and more efficiently.”

The AI Saddle is a device made of injection-molded plastic that squeezes a sow’s flanks while she’s being artificially inseminated. It also holds either a bottle or bag of semen, so employees can move quickly from one sow to the next.

Klocke tweaks the design of his products as he goes, noting “it’s a process.” Other people saw what he was doing and thought he should be selling the AI Saddle to others. In the beginning, it was first made from PVC pipe but they would break. The injection-molded plastic is much stronger.

“This works well for both bags and bottles. It’s very simple and straight-forward to use,” Klocke says. “If you want something to be successful, it has to work every time under any condition. (See sidebar for some of Klocke’s other innovations.)

Breeding and feeding takes time, so incorporating products or processes that make these tasks easier means you can maximize the value of your staff. “Overall labor has become such a big issue in our industry,” says Katie. “Even your best crews, and we have a great crew at our sow farm, can now spend their time where it really matters: taking care of the pigs and sows.”

“I feel like this is just the beginning for the Klocke family,” Ogren says. “Seeing the products they’ve developed over the last five years makes me excited to see what’s next. Not only have they started this successful company but they have many plans for the future.”

Klocke says there’s no “magic number” that ensures profitability. He looks at pigs per sow per lifetime as an important parameter, but he recalls the lessons learned during the farm crisis.

“Bragging rights don’t pay bills,” he says. “If you get hung up on a pet number, it’s really the number that lowers your cost of production. That’s the number you need to focus on.”

Why COVID-19 Relief Should Include America’s Agricultural Fairs
3

Who Are the Winners and Losers in Technology in Animal Agriculture?
4