The Senate late Wednesday evening by a vote of 96-to-0 approved the $2 trillion Covid-19 Phase 3 rescue package.

Link to full text of the legislation.

Link to a summary of the $340 billion supplemental appropriations component.

Link to a section-by-section summary of the rest of the $2 trillion package, including tax, unemployment insurance health care, small-business loans, aid to airlines and other hard-hit industries

• Unemployment benefits would be extended by 13 weeks and was broadened to include freelancers, furloughed employees and gig workers.

• Federally guaranteed loans totaling $350 billion would be available to small businesses that pledged not to lay off workers, and would be forgiven if they continued to pay workers for the duration of the crisis. The SBA loan program could be huge for farmers and ranchers, at least those that employ significant labor.

• $15.8 billion in mandatory funding for the Supplemental Nutrition Assistance Program, formerly called food stamps, of which $100 million would be used for food distribution on American Indian reservations. $15.5 billion is slated for a contingency fund to cover food costs and any surge in enrollment fueled by an expected increase in unemployment because of layoffs and business closures. The remaining $300 million would provide grants of $100 million for food distribution on Indian reservations and $200 million for nutrition programs in the Northern Mariana Islands, Puerto Rico and American Samoa.

• $9.5 billion for the Office of the Secretary to provide aid to agricultural producers affected by the virus.

• $450 million for the Emergency Food Assistance Program (TEFAP), of which $150 million could be used for costs associated with distribution.

The measure would allow the Commodity Credit Corporation (CCC) to use as much as $14 billion in previous funding to reimburse net realized losses.

The increase in borrowing authority raised concerns among some Senate Democrats because the Trump administration tapped the CCC for a total of nearly $23 billion in trade aid payments in 2018 and 2019. Critics say the payment distribution favored large farmers.

An earlier version of the appropriations package in the bill would have given USDA borrowing authority up to $50 billion — a $20 billion increase over the current borrowing limit from the Treasury Department. On Monday, Sen. Patrick Leahy (D-Vt.), the top Senate Appropriations Committee Democrat, said he was concerned about the $20 billion increase in borrowing authority and said President Donald Trump’s use of the CCC for the trade aid payment had been a political move to help his farm base. Sen. Debbie Stabenow (D-Mich.), ranking member on the Senate Agriculture Committee, noted on the Senate floor that cherry growers in her state of Michigan had not received payments although they’ve been hurt by trade practices by Turkey.

The Senate rescue bill for agriculture and food also includes:

• $8.8 billion for child nutrition programs, including the school lunch program.

• $450 million for commodity food purchases for emergency food assistance through food banks and other nonprofit groups.

• $100 million for continuing a pilot project to expand broadband service to rural communities.

• $4 million for the Foreign Agricultural Service, which promotes and develops export markets for U.S. farm goods, to cover costs of moving overseas employees and their families back to the United States.

• $33 million for the Food Safety and Inspection Service to hire temporary and part-time workers and to cover relocation costs for temporary inspectors.

• $20.5 million for a subsidy that will allow $1 billion in lending authority for the Business and Industry loan guarantee program for rural businesses. 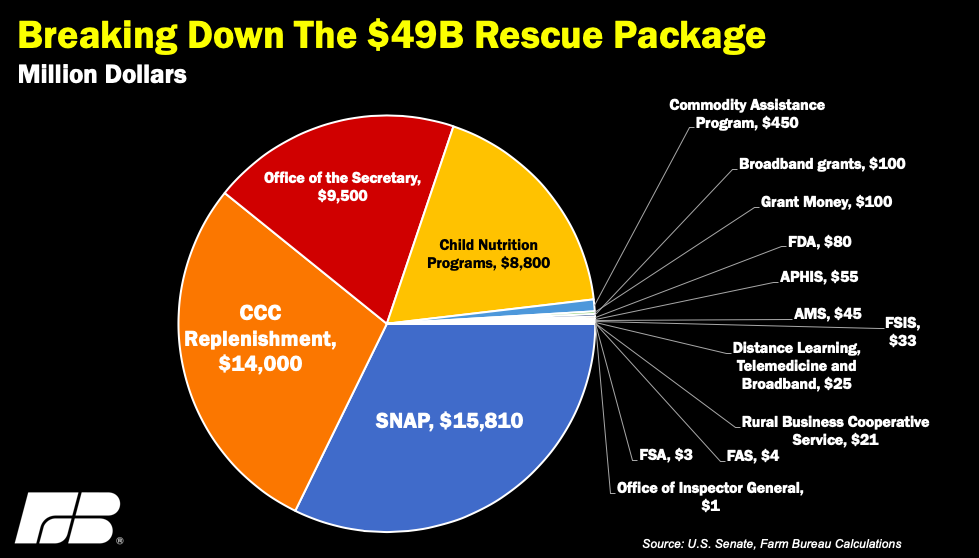 Beth Ford On Food Production in The Post Pandemic World