After sampling the vaunted Impossible Burger patty at a local restaurant, I must say: It’s good, not great; edible, not memorable; decent, if not delectable — but it retails at twice the price!

While treating a pair of Japanese exchange students staying with our family this summer to an “American meal” at a Seattle-based burger chain last week, I noticed that one of the options on the restaurant’s extensive hamburger menu was substitution of an Impossible Burger patty for the traditional ground beef burger.

Compared with the exotic ingredients in other hamburger choices — such as the Livin’ Fajita Loca Burger, with grilled beef or chicken strips and cheddar cheese; the “Banzai Burger,” with grilled pineapple on top of a teriyaki-infused patty; or the “Burin’ Love Burger, featuring fried jalapeno and spicy salsa — the description of the chain’s Impossible Burger option is comparatively bland: “Red Robin now brings burger lovers a protein option that has all the meaty deliciousness of beef in a plant-based patty.”

I decided to order the Impossible patty on a comparatively pedestrian “signature” burger, not because I was hungry for its (alleged) meaty deliciousness, but as a mandate for a journalist who regularly writes about alt-meat developments.

First, its sensory appeal. The Impossible Burger, for all the over-the-top adoration lavished on its manufacturer by the media, is pretty much what you’d expect from a veggie patty: A familiar aroma, an acceptably “beefy” look but an overall bland eating experience.

Partly that was due to the fact that the patty is fried, not grilled, but it’s also a consequence of the somewhat mushy texture and its non-natural appearance, looking as it did like it came out of an extrusion machine (which it did).

As for its flavor, it was hard to distinguish it from a traditional ground beef burger — if one consumed the patty buried beneath bites of cheese, condiments and a gourmet bun … which is exactly the way virtually everyone has experienced the product.

However, I made sure to sample a few bites of the plain patty by itself, and as a result, I can testify that for all the hype, the Impossible Burger is merely an analog, a decent attempt to approximate a real hamburger.

Finally, let’s examine the nutritional comparison, since the core of the alt-meat sector’s messaging is that these products are not only better for the environment, they’re also better for the people purchasing them. So, is there any truth to the claim that plant-based patties as healthier than conventional beef?

Take a look at the chart below, which is based on data submitted by Impossible Burger, as well as USDA nutritional data for ground beef, and you tell me. 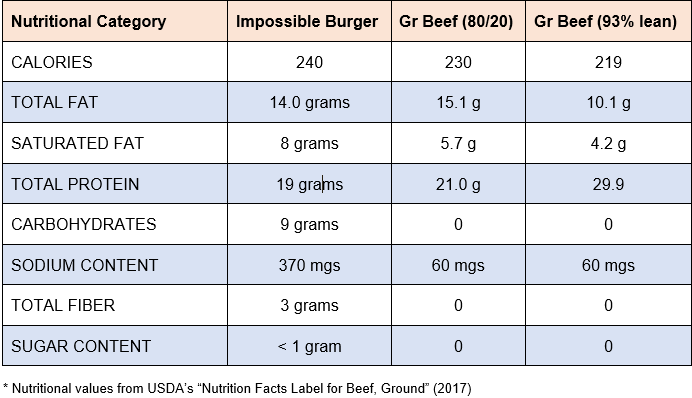 If the comparison is between Impossible Burger and lean ground beef (93% lean), the ground beef’s nutritional advantage is significant.

Oh, and there is one other consideration to factor into the calculation whether it’s worth it choose this particular plant-based patty over a beef burger.

There is a small footnote at the bottom of the promotional table tent hawking the Impossible Burger that informs patrons of an important detail:

“There is a $3.75 surcharge when substituting the Impossible Burger.”

Which means we can add one other statement to the messaging that plant-based foods are better for the Earth and better for consumers.

At this point in time they’re also way better for the manufacturer and the restaurant operator.

The opinions in this commentary are those of Dan Murphy, an award-winning journalist and commentator.