A Country-Cured Artisan At Work

Allan Benton, owner of Benton's Smoky Mountain Country Hams, will use any wood on his country hams, as long as it's hickory. ( JoAnn Alumbaugh )

The Great Smoky Mountains are known for the trail leading to Chimney Tops peak, the cool sprays from Grotto and Laurel Falls, and the solitude of the iconic fog as it rolls in over the valleys. Encyclopedias say the name "Smoky" comes from the natural fog that often hangs over the range and appears as large smoke plumes from a distance. Maybe, in reality, it’s coming from one of two smokehouses at Benton’s Smoky Mountain Country Hams.

Behind the humble façade of the cement-block building in the foothills of the Smokies just outside of Madisonville, there is a business built on an intense devotion to time-tested methods and the strong belief that excellence will always prevail. That philosophy is shouldered by the business’s founder and owner, Allan Benton.

This silver-haired, soft-spoken southern gentleman runs a successful business with hard work, a steadfast commitment to quality, and a keen yet understated business sense. He sells 18,000 to 20,000 hams and more than 30,000 lb. of hickory smoked bacon every year. It’s small by commercial standards, but it allows Benton to keep a close eye on quality and produce country cured products the way they’ve been made for generations. He jokingly calls the business a “thoroughbred hillbilly operation,” which turns out to be an apt description.

Meager Beginnings
Benton credits his start in the ham business to Albert Hicks. A relative of Hicks’ wife came to visit, and wanted to know what kind of meat he was eating and Hicks told him it came from the smokehouse. The relative said he’d like to buy some hams – in fact he wanted to buy 100 hams.

“Albert was a pretty enterprising fella,” Benton recalls, “and he thought there might be something to this and he built a pretty solid little business.”

Benton started his career as a high school guidance counselor but after moonlighting to earn a Master’s degree, he discovered the salary wasn’t going to be enough to support his family. He really didn’t know what he was going to do.

Then, he took a look backward to the time-honored traditions of his youth.
“My family was from the mountains of Virginia, and both sides of my family killed hogs on Thanksgiving Day. It would take all day Thursday, Friday and Saturday to work all that meat by hand-cranking the grinder for the sausage and salting down the pork.

That caramel color of Benton's Bacon represents three days “of intense smoke” in the smokehouse. Many chefs prefer to slice the bacon themselves, so Benton sells it either pre-sliced or unsliced.

“I thought, ‘that’s not rocket science – I can do this. I went back to Albert Hicks and asked if he’d consider leasing me that old building where he cured his meats, and after a few meetings, he finally agreed,” Benton says.

Benton decided if he was going to be in the business, he was going to do it right. He wrote to universities in the area and discovered that the University of Tennessee had a vast amount of information about curing and smoking.

Benton says he learned far more from Hicks than just the meat business. Hicks taught the eager young entrepreneur how to squeeze every nickel (including using both sides of a piece of paper before throwing it away), and to treat each customer as if he or she were special.

“If a neighbor came in, he’d say, ‘Al, go back in the left-hand corner and get Mr. Green one of those hams.’ Well, we were selling out of the back left-hand corner, but this made the customer think he was getting something special. Albert had a way with people. He was a product of the Depression and he instilled those values in me. If he had not done that, I would not be here today.”

If You Build It…
Benton is the first to admit that it hasn’t been an easy road, especially during those early years.

“The first 20 years I was in business we barely kept our doors open,” Benton says. “We built this new building in 1978, and I can tell you, there were lean times.”

But he stuck by his commitment to quality and about 15 years ago, it paid off in a big way.

Benton uses only salt, brown sugar and red pepper in his rub, just like his grandparents did years ago.

He had picked up an account over in Walland, Tenn., called Blackberry Farm. Benton had no idea what kind of place it was, but he quickly found out. John Fleer and his predecessor, Walt Carter, were chefs who put the upscale farm-to-table restaurant on the culinary map, and about a month after Benton took him some bacon and ham, Fleer called him.

Eventually, Fleer built a menu around Benton’s ham and bacon, and shared his products – often compared to Italy’s famous prosciutto – with chefs all over the country. Fleer also talked Benton into doing a country ham tasting at the Southern Foodways Alliance that year, and it became a turning point for the business.

“It was going to be in October and I told John I was too busy to come,” Benton recalls. “John said there would be 400 people there, including the best chefs and food writers in America.”

Benton wanted to just send 20 hams to the event but Fleer knew it was imperative that Benton be there, since he was so closely tied to the products, and he wouldn’t take no for an answer.

Feeding the beast: “We’ll use any wood, as long as it’s hickory,” Benton says with an easy smile. He uses Applewood for some of his bacon, but everything else is hickory-smoked.

“So, my wife and I went down there with 20 hams – we were going to lightly sauté some of it and serve it on a biscuit and some of it we’d slice thin and serve like prosciutto. The tasting was on a Saturday night; my wife and I had taken frying pans that were about the size of manhole covers. We started frying ham at 4:30 and we fried ham until 11 p.m.”

The response was overwhelming. All night long, chefs came up to him and said, “Can you sell me this product?”

“I’ll never know if the ham was as good as they thought it was, because Jack Daniel’s catered the event. They’d eat those ham biscuits and chase it with Jack Daniel’s, and we all had a merry time!” Benton says with a smile in his slow, Tennessee drawl. 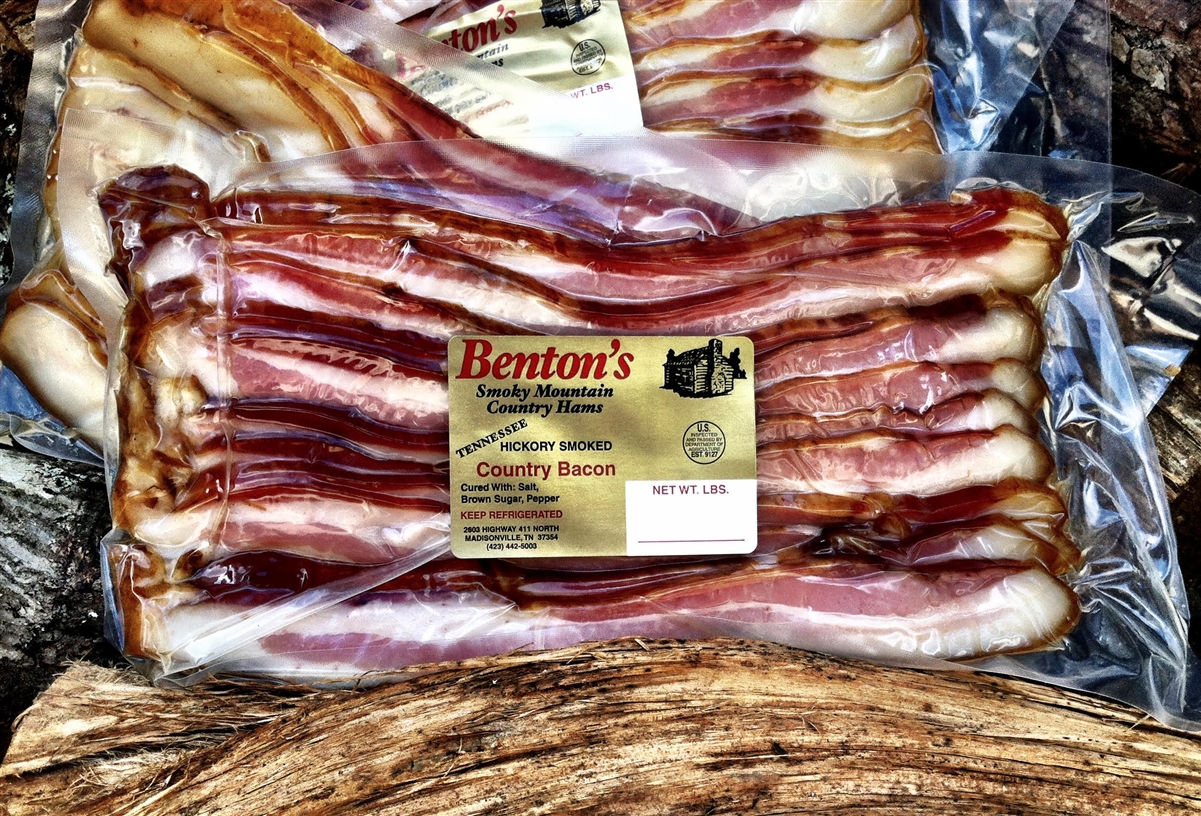 Four pounds of bacon at Benton’s is $30. It may sound pricey, but devotees say it’s worth every penny. Eli R. from California writes, "I find myself standing in front of my freezer in the middle of the night, just smelling Allan Benton's bacon through the packaging."
Photo: Benton’s

After that significant success, Benton had an epiphany.
“I called a team meeting of my three employees the following Monday morning and told them we were going to increase production on our aged hams by 500% annually.”

Benton’s gamble paid off and he hasn’t looked back.

Editor's Note: Read about some of Benton’s famous customers in a follow-up article.

Building a Farm-To-Fork Business One Pig at a Time

When It Comes to Biosecurity, the ‘IRS’ is Your Friend
2